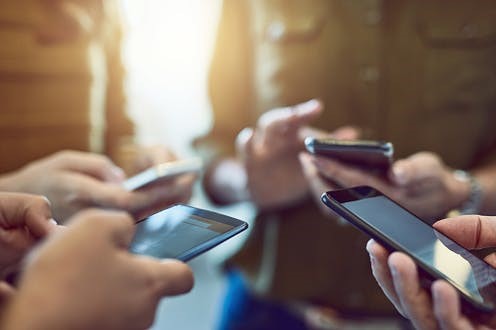 It’s likely that you were notified by your smartphone or device, the notification itself as a part of trundle that you’re figuratively swiping left in-between email reminders about upcoming events and direct messages from your favourite social media. Or you were trawling your usual network feeds for updates to catch your attention.

Now if you were to record the time between which you check your smart device again for notifications, new messages or responses, I’d bet that this would be within a minute or just outside of it,  and would require no prompting whatsoever… an automatic, natural reaction much like, say, breathing?

A year back now when Sydney’s CBD was in full force and absolutely bustling (feels like a lifetime ago) I had remember telling a pedestrian to “Look up!” because they were walking while looking down at their smartphone screen during the lunch rush and just asking for an incidental to go down. These smart device distractions in everyday situations where we should be more actively engaged and attentive to our immediate world, are becoming more the norm, especially with the current global crisis and all eyes and ears glued to these small screens for even the smallest newsfeed updates.

Admittedly, I’ve been guilty of this also *stands up in anonymous meeting group circle* “Hi everyone, it’s been 24 days, 4 hours and 19 minutes since my last smart device infringement…”

Separating norms, habits and addictions have become difficult in this regard. A study conducted last year on 205 users, ranging from ages 16 to about 64, and spanning across the UK, China, Australia and the US, drew a preliminary conclusion that people grow emotionally attached to their smartphones. Obviously, a lost or stolen phone can be replaced, and even more conveniently, the data backup restored to the replacement. However the same cannot be said for a lost pet dog for instance.

The study, in fact, suggests that the emotional connection comes from is the connectivity and community the device facilitates – what we’re actually sacrificing for behavioural controls is the luxury of functionality.

It is with the ease of which these devices can be used, the ability to pour one’s life into apps and social networks, customise and personalise options, is what creates the need for us to be close to it, the loss of it coming with the emotional baggage of disconnection and an inability to “interact substantially”.

Do we know what life was like before this? I would say kind of, but maybe in another ten years’ time, not so much. Sure, we still must get of our butts for some of our daily activities, but as we move, so does our devices, both figuratively and literally.

To this end, we as technologists should consider the end-user more often under this behavioural dynamic. There is a dated notion that customers and companies that require services and uplift such as Purple, are plebeian when it comes to technological capability. Perhaps against back-end, Azure developer this is true, but in

We’re well and truly plugged in; it’s the world we live in now. I can get my plumbing fixed and a slice of cake brought to my doorstep by a complete stranger on a single app (and trust that it will happen).
Why not?

For further reading on the study, see the article under Computers in Human Behaviour.