Tags are important metadata elements attached to our Azure resources in the form of pairs of key/value strings.

Sometimes we also need to migrate our existing tag values to new tag key/value pairs. Completing this tag migration manually from the Azure Portal for hundreds of resources would be very time-consuming so in this blog let's examine how the migration can be done efficiently using PowerShell.

It uses Get-AzResourceGroup and Get-AzResource to query Azure for RGs/resources matching our tag key object filters. The query results are also backed up to a local CSV file because we never want to modify anything without a backup!

Update-AzTag is also leveraged to delete the old tag key after the new tag key has been created on the resource. Essentially a cleanup/housekeeping task.

The first 8 script lines shown above are pretty standard - Authenticate to Azure and set your Azure Context/Subscription if you have multiple Subscriptions.

Note: You can change these variable values to anything you want of course. I've just provided them as an example for the context of this blog.

Next we're using the Get-AzResourceGroup cmdlet with an object filter matching Tags.Keys to $oldKey and then storing the results in a variable named $rgsOldKeyBackup and finally providing a count of the variable results.

In lines 17-18 we're running an if statement on the $rgsOldKeyBackup variable, so if the results are not empty then we'll again use the Get-AzResourceGroup cmdlet with the object filter and backup our results to a CSV for future reference if required.

Lines 19-29 below are where the heavy lifting happens, beginning with a new variable $rgs being used to store Get-AzResourceGroup cmdlet results before starting a ForEach-Object task to cycle through the query results.

In 21-23 we're retrieving the existing key value from the query results and storing them in a new variable $rgOldKeyValue. Then we use that variable to construct our $rgNewTag and $rgOldTag variables.

$rgNewTag will be called by Update-AzTag to merge the new tag key and existing tag key value into the resource group's tag hash table.

$rgOldTag will be called by Update-AzTag to delete the old tag key if the new tag key has been successfully created on the resource group.

Lines 33-49 are using the same script logic explained above, but we are querying resources (not resource groups) this time using Get-AzResource.

The screenshot below shows my demo environment where I have a mix of resources and resource groups with the tag key costcenter and various tag values e.g. examplevalue1, examplevalue2, etc

In the tag migration script, I have

Running the script from the terminal gives me a local CSV backup of all existing tag keys and values for resources and resource groups matching my object filter.

The screenshot below explains some of the return outputs I receive from my terminal window when running the tag migration script. This is specific to resource groups.

The end result after my tag migration script completes is that I have all old tag key values migrated to the new tag key and I have deleted the old tag key from Azure. Happy days! 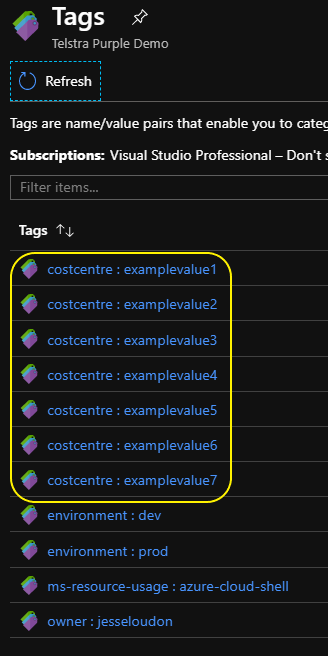 Migrating existing tag values to new tag key/value pairs can be a daunting task if done manually but with PowerShell cmdlets Get-AzResource, Get-AzResourceGroup, and Update-AzTag you can quickly automate the job as part of a repeatable process.