How DevOps & Infrastructure as Code can supercharge your cloud deployments

Most companies aspire to release their products and services faster and more reliably, and agile IT systems and solutions are an essential ingredient.

However, the reality is that many companies manage IT infrastructure using a combination of manual effort, complicated processes and a bit of hope and prayer.

As an Azure infrastructure architect with Telstra Purple, I have the opportunity of helping a diverse range of organisations automate and streamline their cloud solutions.

Recently I assisted a customer of ours launch a new financial product in record time and under budget, which was a huge novelty for them at the time.

Historically their IT projects had been suffering from persistent delays and over runs when releasing new applications and services.

One of the biggest factors was a lack of automation within their cloud infrastructure stack.

The application teams had begun to implement DevOps methodologies, however, without automated infrastructure, application deployment and testing still required a lot of manual and repeated effort.

Quite simply they had continuous integration but not continuous delivery.

One of the most critical but often overlooked components allowing customers to effectively implement DevOps and automate cloud systems is infrastructure as code.
IaC describes infrastructure in a code-based format which is stored in a version control system alongside existing application source code and deployed using continuous delivery and deployment pipelines.
Infrastructure as Code provides many benefits including…

Docker Containers
A Docker image is a lightweight, standalone, executable package of software which includes everything needed to run an application: code, runtime, system tools, system libraries and settings.
Docker makes it easy to create, deploy, and run portable, isolated and self-contained units of application code.

Infrastructure code executed inside containers allow developers to package up self-executing infrastructure modules, including dependencies and libraries and ship them out as a self-contained unit, which can rapidly be configured, deployed and updated.

Containers are versioned and tagged making them easy to reference and reconfigure.

Continuous Delivery
Integrating modularised infrastructure as code containers into a CI/CD system such as Azure DevOps provides the ability to tightly couple application code and the dependent underlying infrastructure into an automated end to end deployment solution.

Now it’s time to configure these core components into a continuous integration and delivery infrastructure as code pipeline.

Terraform relies on a number of core modules which change frequently. Keeping these updated on each developer’s pc is time consuming and can cause inconsistencies.

A Docker image containing all of the necessary deployment utilities including Terraform, environment variables and other configurations is a fundamental component of a continuous delivery pipeline.

Step 1. Install Docker Desktop
Docker can be run on any machine type. For this example, I’ll be using a Mac
1. Download docker from https://hub.docker.com/editions/community/docker-ce-desktop-mac/
2. Save Docker.dmg file and launch
3. Docker will be available to run in terminal

A Dockerfile describes the configuration of a Docker image. This sample code builds a Docker image including the Terraform bundle. Ensure a file called terraform-bundle.hcl sits alongside the Dockerfile.
Terraform bundler is a Go based method for creating a Terraform installation package which incorporates modules configured in the terraform-bundle.hcl file.

What is the code actually doing?

Step 3. Create a container registry to store the container

Step 4. Build a Dockerfile into an image

Once scripted, the Dockerfile needs to be built and launched as a running container.

The -t tags the image by the standard repository/image format and the . signifies the path to the Dockerfile. Ensure to tag the image by exactly the same name as the container registry.

Once the execution environment container has been built it must be integrated it into the infrastructure code development process.

There three main ways to inject source code into a running container.

Mounting a volume is the most sensible and flexible method for this approach.

Step 1. Run Dockerfile and mount code repository as a volume

The following command creates a running container incorporating all the necessary Terraform modules and the mounted repo and launches an interactive bash shell session.

It makes sense to add terraform to the system path so it can be called without specifying the full path.

Infrastructure as code allows continuous delivery to be incorporated into continuous integration.

Application code can now be automatically deployed onto the necessary infrastructure each time its complied and built.

To facilitate this process, each Terraform project needs to have a custom Dockerfile (septate but built upon the Terraform execution environment).

The Dockerfile, located in the Terraform project root, builds a container with the latest source code and executes a plan or apply along with input variables, passed as an argument at run time.

This creates a versatile and flexible infrastructure container which is integrated into Azure DevOps For those familiar with Jenkins it performs a similar function to a Jenkinsfile.

Applying continuous integration and delivery principals to infrastructure solutions ensures that code is regularly, built, inspected and tested and allows multiple developers to contribute to the same solutions.

After code is checked into a developer branch a pull request is raised to merge into a test branch.

A developer should paste the output of the Terraform plan into the pull request so it can be inspected by a reviewer.

Once the pull request is reviewed and approved, code is merged and a Terraform plan is run, the output of which can be compared to the expected results.

Approval of the release pipeline build is subject to a successful code merge and acceptance of the Terraform plan.

The release pipeline is similar to the build pipeline except that a Terraform apply instead of plan is run.

Once the release pipeline has completed executing, infrastructure is built and can be inspected and tested.

The final end to end workflow

Once the core components are in place the new infrastructure development process looks like this.

1.      An Infrastructure developer runs a bash shell inside the containerised execution environment and mounts their Terraform project code as a volume. 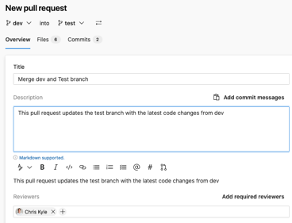 2.      Terraform code is always run from inside the container which ensures that all developers are creating and testing code in identical environments.

3.      When code is ready for testing and branch merging, a pull request is raised. The container is tagged with a version number or tag which allows specific infrastructure configurations to be easily referenced. 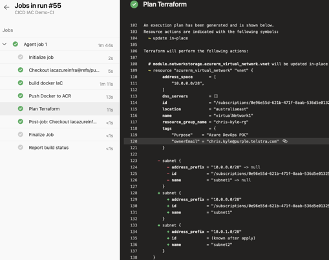 4.      The developer copies the output of a terraform plan command into the pull request which allows an approver to understand what a particular pull request will achieve.

5.      Once the pull request is accepted an Azure DevOps CI pipeline builds a container, executes a Terraform plan command and pushes the container into an Azure Container Registry (ACR).

6.      After the plan is inspected, compared, and accepted, a release pipeline is approved to perform a Terraform apply which deploys the infrastructure into a test environment.

7.     Once the infrastructure deployment is successfully reviewed and tested it can be confidently integrated into existing application continuous delivery pipelines.

Time to market and reliability of cloud infrastructure deployments have significantly improved.

If your business would like to take advantage of the latest cloud technologies or has been struggling with persistent challenges, please reach out and set up a complimentary strategy session with one of our specialist consultants.