In this blog we'll look under the hood of an example repository I created to deploy a set of custom Azure policies, initiatives, and assignments. I'll also demo the code and show you how to resolve an issue that may arise when recreating a policy which is a member of a policyset.

Later we'll also explore some Terraform coding patterns which can be reused for your own Terraform modules saving you time during the module authoring process.

In case you missed Part 1, let's take a quick look again at my example repository comprising of 4 AzureRM modules:

The parent module calls all child modules and it's where we set input variable values if required by the child modules.

By the way, there's a few Terraform best-practices for module design that I've adhered to:

As there's always exceptions to best-practices I recommend evaluating each practice first, then adjusting to your own unique scenario/requirements.

Now let's run through a quick demonstration of my example Terraform repo in action and see the outcome in Azure.

I have the following software installed locally:

My demo Azure environment also currently has 0 custom policy definitions, policysets (initiatives), and assignments. This is as 'clean slate' as it gets!

Next, running terraform init from the root module automatically downloads the module plugins.

Then, using terraform plan and terraform apply from the root module I see a message showing 24 resources to add.  And because I'm happy to proceed with the changes I've entered the word yes.

After the apply job has completed we get a nice green summary. Green is usually a good sign :)

Looking at my demo Azure environment, you can see the custom policies, policysets, and assignments have been deployed as per the code. Success! 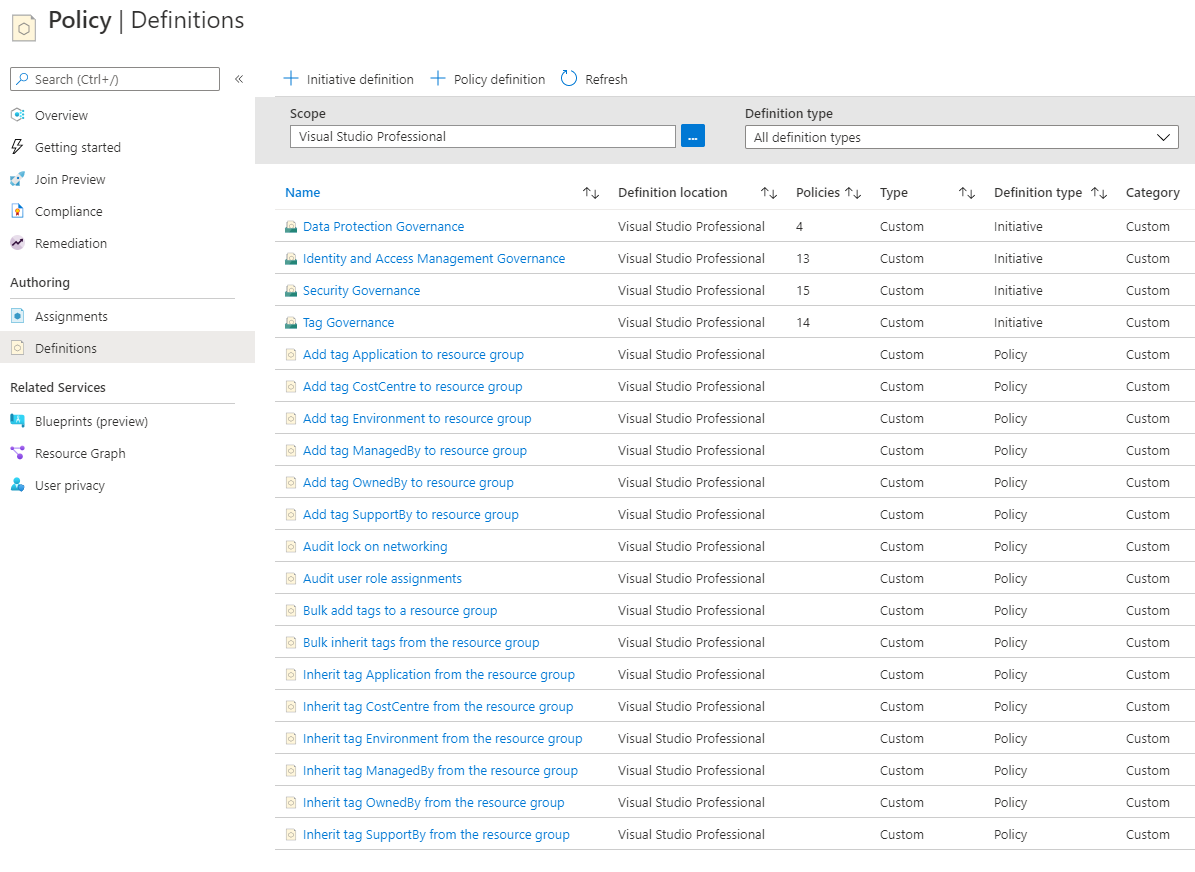 Note: You might notice above that the compliance state for my newly deployed Azure policy assignments show as "Not started".

So if you don't want to wait for the Azure policy engine to start a compliance scan you can kick off a scan manually using Start-AzPolicyComplianceScan from the Az.PolicyInsights PowerShell module.

Issues with recreating Policies that are in a PolicySet

When modifying variable values which are used for Terraform resource names (such as the case in my example repo code) you may encounter an issue with the Azure policy definition recreation not working because the policy is a member of a policyset. Here's how to fix that with terraform taint.

In this example I've modified the variable list value CostCentre, changing it to CostCenter.

After running terraform plan/apply I receive one or more errors such as the below snippet:

So to resolve this we need to use terraform taint to target the relevant policyset resource and force that to be recreated as part of the run.

After tainting the relevant policyset and rerunning terraform plan/apply I get the following change summary:

A successful completion shows my updated custom Azure policies in the portal. Boom!

Now that you've seen the code in action through my module demo above, it's worth looking at some coding patterns which you can reuse for your own Terraform project.

Remembering back to when I was deploying just few Azure resources using Terraform the code logic was fairly rudimentary. As a result there was a large amount of code duplication.

The code duplication and simplicity of the logic became an ineffective development practice as the Azure deployment scaled up to cover more policies, policysets (initiatives), and assignments. So I adopted the following 3 patterns.

Using ${var.variableName[count.index]} means the index of tag keys contained in your variable list can be referenced for each policy definition resource created.

All resources created by a resource block that uses count = length(var.variableName) can be referenced using ${resourceProvider.resourceType.resourceName.*.output}.

This output variable should be defined in the same module where the policy definition resource is created.

Then, within your policyset resource block, for each policy definition id reference each input variable created above using ${var.variableName}.

First, define a variable list containing the display names of existing built-in policy definitions that you want to include in a policyset.

Next, define a data source to azurerm_policy_definition and use count = length(var.variableName) to iterate the data source lookup based on the number of values in your variable list.

Then, use display_name = var.variableName[count.index] to lookup policy definitions based on the display names definined in your variable list.

Finally, within the policyset resource block, reference each policydefinitionId from the data source using ${data.dataSource.dataSourceName.*.id[X]}.

Authoring my own AzureRM policy modules provided me with maximum control over the HCL code and freedom to experiment with various coding patterns.

A month ago, when I was testing Azure Policy deployments with Terraform, there wasn't any AzureRM Policy module available from Microsoft on the Terraform Registry.

Today there are 22 Azure-related modules publicly available and we've just scratched the surface of what's possible with Azure Policy as Code with Terraform so watch this space for future developments as the HashiCorp/Microsoft partnership ramps up!